Habitat III and the Right to the City

On 10 December 1948, the General Assembly of the young United Nations (whose foundations were laid in 1942 with a wartime document that prefigured objectives centred on peace and security) approved and proclaimed the Universal Declaration of Human Rights. This declaration enshrined the right to freedom and equality for “all members of the human family” in the words of Article 1: “All human beings are born free and equal in dignity and rights.” 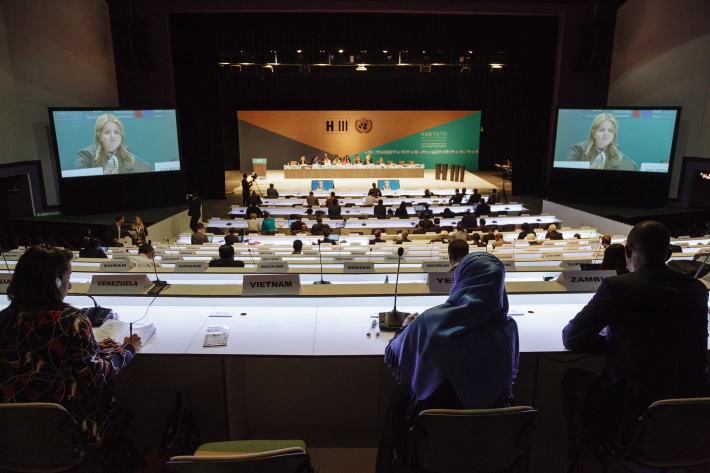 Despite the importance that the subject of housing and habitation had already acquired since the start of the century, in those years urbanisation and its impact were not yet central concerns on any nation’s agenda. The world’s population was growing rapidly (from about 1.5 billion at the turn of the century to 2.5 billion by the late 1940s) but two thirds of that population still lived in rural areas.

Held in Vancouver, Canada, in 1976, Habitat I was the first United Nations conference that fully sized up the challenges of urbanisation (a phenomenon that had in the meantime mushroomed hand in hand with population, which by the mid-1970s had reached 4 billion). This conference saw the launch of the UN-Habitat programme, dedicated to studying human settlements, the distribution of resources (particularly in countries of the Southern Hemisphere) and the development of strategies to guarantee everyone a “dignified house”.

In 1996, on the tide of the world’s constantly growing population (now approaching 6 billion) and the concentration of people in urban areas (with half of all human beings now living in cities), the United Nations organised a second conference in Istanbul, Turkey, to evaluate Habitat’s two decades of activity and identify new strategic goals heading into the new millennium.

From that moment, Habitat began to enjoy an increasingly high profile among United Nations programmes, given that an ever clearer link was emerging between sustainable development, the fight against poverty and hunger, and the urban question. It is precisely this link – or rather the need to come together to rethink economic, housing, environmental and social sustainability in a broad sense – that lies at the heart of the New Urban Agenda signed in Quito: an extensive series of declarations and commitments in which the world’s countries assert a shared vision and a common strategy for its implementation. This vision outlines a world where “no one is left behind”, and where the city is a means to ensuring everyone’s access to basic rights, which go beyond housing to include public spaces, gardens, schools, mobility and an inclusive economic system.

Indeed, cities are seeing an increasing concentration not only of people, but also of economic flows, material consumption and energy expenditure. Cities are consequently also subject to all the ensuing environmental problems (since urban areas are largely responsible for the pollution behind global warming) as well as issues concerning economies of scale and economies of sharing goods and services.

For this reason – despite the signing of the Agenda being naturally incumbent on nations – the real novelty of Quito was the widespread attention that the conference garnered, with some 50,000 people registering to attend. These participants included 500 delegations from cities around the world and 200 mayors. Indeed, Joan Clos, the current executive director of the UN-Habitat programme, was himself mayor of Barcelona for nearly ten years.

So, while projections are telling us that over 70% of the world’s population will be living in cities by 2050, cities are now asking to be given a seat at the decision-making table. Accordingly, cities, associations and a wide range of society’s interest groups travelled to Quito to put their point across and secure a role in the process of implementing the Agenda, which will continue until 2036. These grass roots are not only asserting the strategic importance of local administrations and organisations, but also claiming what could be defined as the “right to the city”, drawing on one of Henri Lefebvre’s expressions used by David Harvey and largely cited in the debate of anti-capitalist movements. This is not a right to property, but a right to access, use and manage the space of life.

In the lengthy preliminary stage that characterised the drafting of the New Urban Agenda, the greatest clash occurred over the explicit wording of this particular right, which was eventually mentioned in the Agenda’s final formulation, albeit in somewhat vague terms. In a rather exceptional process begun in September 2014, a United Nations team prepared thematic documents which were sent to member states but also to international organisations, with an invitation to comment and propose modifications. Subsequently, Habitat’s secretariat outlined a Zero Draft which was also circulated until it reached its final version in Quito.

The dispute over the concept of the right to the city occurred in this context. The secretariat resolved the clash by including the right’s expression but omitting any condemnation of gated communities or forced expulsions, which in recent years have often been exercised on a large scale. Expulsions is the title of the latest book by Saskia Sassen, who was at Quito with Richard Sennett and Richard Burdett. Together they chaired one of the many events and round tables running in parallel or declaredly as alternatives to the activities of Habitat.

Certainly, the subject of elaborating new forms of property rights that diverge from private property – along with new circular and inclusive economies – remains an underlying issue which inextricably links economy, politics and the city. The Quito declaration quietly proclaims a new right. In a world where a billion people still live in shantytowns and temporary shelters, this can only be considered as a step in the right direction.