Bricks made from agricultural leftovers such as plant stems and seed husks, bound together with mycelium (the branching network of filaments constituting the underground vegetative part of fungi) and “grown” in moulds instead of oven-baked with high energy expenditure. 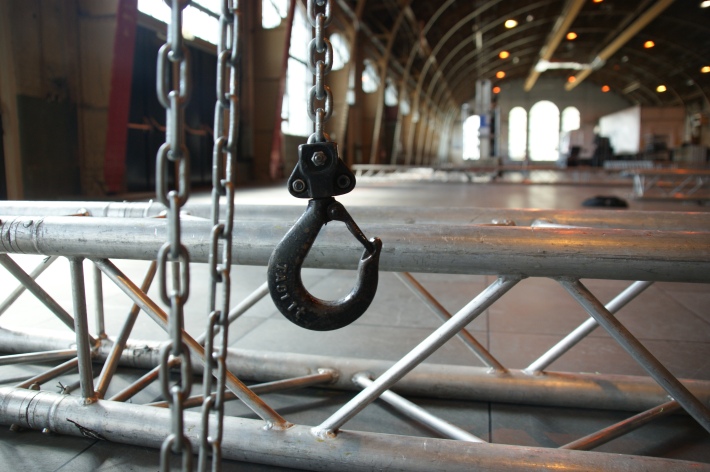 Concrete mixed with bacteria, which precipitate calcium carbonate as a waste product to fill holes and cracks in the concrete, making it more durable and reducing maintenance costs. Or packaging and furnishings made with 3D printing, but completely biodegradable because they are based on fungi which function as a binder for organic and local materials (such as straw or vegetable residues). As a result, after a package has been opened or when a chair reaches the end of its lifespan, the discarded material can end up in the garden as fertiliser rather than in the garbage dump. Fabrics grown by cultivating mycelium or bacteria that, together with yeasts and microorganisms, produce cellulose in a fermentation process which gives life to flexible vegetable skins, ideal for use in clothes or as decorative fabrics. A new generation of materials, processes and objects such as the Mycelium Chair by the designer Eric Klarenbeek, on which fungi literally grow as tangible proof of mycelium used as a natural binder for the structure. 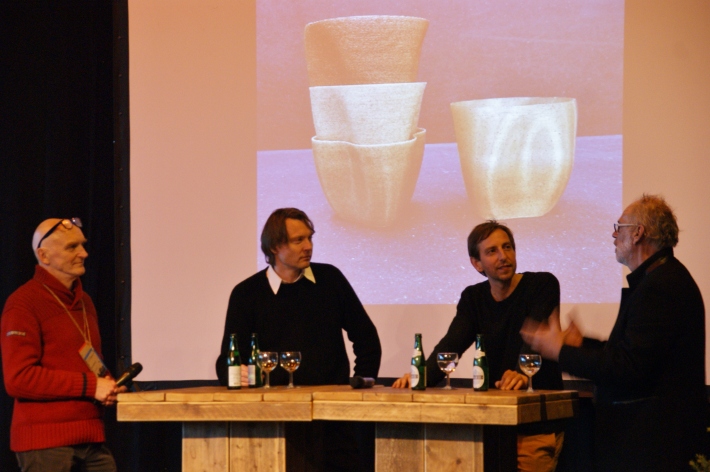 These topics summed up the underlying theme of an extraordinary Dutch Ecoweek. This NGO seeks to promote environmental awareness by organising meetings and design and construction workshops in collaboration with its host cities and local communities. With the support of Avans University, in Tilburg it combined cutting-edge experimentation with age-old construction technologies. The programme also included six main speakers from different backgrounds (art, philosophy, biology and design), a conference held by research chemist Michael Braungart, father of the “cradle to cradle” concept, and seven workshops exploring concepts of biomimetics and the social and environmental impact of design, testing construction practices with natural materials and low-impact technologies.

The Ecoweek format (organized by Avans University of Applied Sciences with Gie Steenput and Michiel Smits as tireless Project leaders) demonstrates its capacity to offer architecture students a vital opportunity to gain hands-on experience of a design process that starts from an idea, its representation and sharing. The idea is then verified via physical scale models or experimentation with small models, and finally constructed with everything this entails in terms of process management, spatial analysis, materials impact, the specificity of machinery and tools, and the importance of collaboration and teamwork. 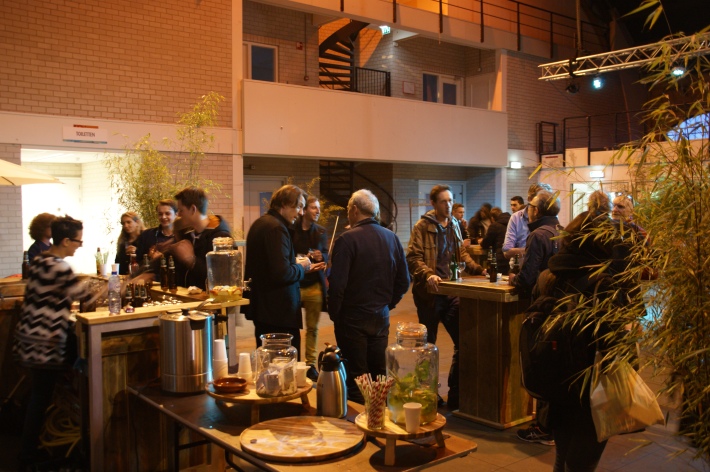 An online vote awarded the final prize to the workshop led by Dutch studio ONIX. Their project focused on the basic material of wood in the form of pallets and simple planks, which were to be used without mechanical connectors or adhesives in order to preserve their potential for reuse. The declared objective of the ONIX workshop was to develop modularity in order to build mega urban furniture. The result was an articulated scaffold structure that unites and gives new life to three train tracks, which symbolise the place’s identity as an ex-repair yard servicing the city’s canal and rail transport systems. A structure that one can “stay in, move through, move underneath and climb over”, it was characterised by a basic triangular component composed of three pallets tied together with bands. When assembled, it constituted a convincing play area for climbing, as well as a place to sit and have a chat on the comfortable wooden planks set at various heights.

The workshop headed by Paul Kersten, meanwhile, concentrated on the identity of Tilburg and its transformation from an industrial city. A former wool production capital, Tilburg is characterised by a system of canals that were built to facilitate the transportation of materials and goods, and which were progressively abandoned during the 1970s together with other industrial structures. In Kersten’s workshop, the process focused on the place – i.e. the Wilhelmina Canal and its semi-abandoned state that nonetheless offers great potential for the city – together with the medium of video as a tool to investigate, communicate, construct and share a vision of a different and better future for the community. 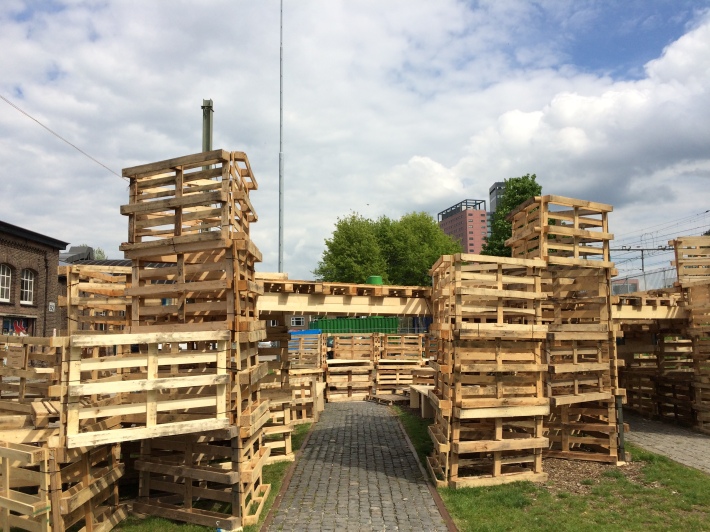 Two workshops – one led by Lydia Fraaije-Beukes and Ilse van Rosmalen, and the other by Jasper Sluis and Willem Böttger – centred on concepts of biomimicry. In other words, their focus was on how to improve our design process by capitalising on almost four billion years of knowledge and strategies accumulated by nature, and how to design by working with products that are “grown” instead of “made”. Here again, in Sluis and Böttger’s workshop students worked on scaffold structures, among other things. One of these structures experimented with the combination of blocks made of straw and mycelium set on a curved wooden framework. Within a week, the organism had grown and started to bind the elements together.

Straw and wood were the working materials in a workshop oriented towards a 1:1 scale experiment for the possible redevelopment of a gymnasium in Udenhout, a suburb of Tilburg. The community has sufficient economic resources for the intervention, and over the last few months it has been working with Avans University to evaluate potential innovative solutions based on natural materials. The aim is to reline the building’s existing shell with a layer of straw while giving effective visibility to the material. After an initial attempt with a cladding in plexiglas, the workshop tested a solution with thin inclined sheets of wood. 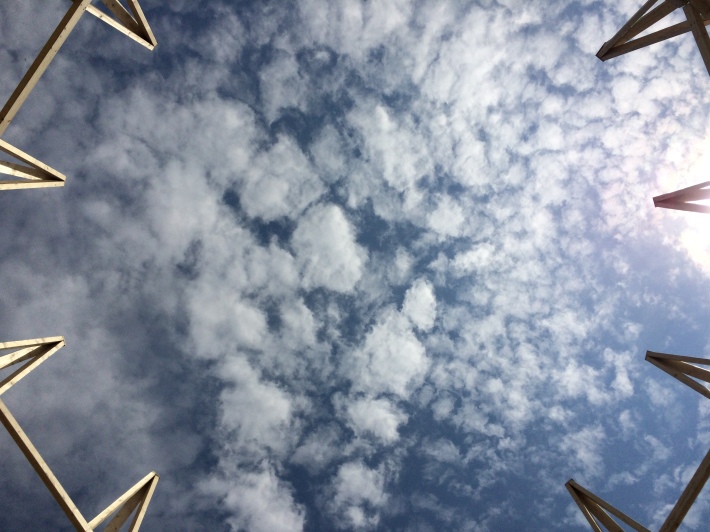 The all-wood installation produced in the workshop run by architects Argjirë Krasniqi and Gëzim Paçarizi from Kosovo was an exercise aimed at teaching to “build with void”, constructing with as little material as possible and developing a sensibility for space itself. Once again, this was achieved with modularity and the repetition of a simple and stable building element, which becomes lighter as it stretches upwards (to six metres). The result is a transparent tower based on triangular modules, which form inverted V shapes able to adapt to the uneven ground and to take your eyes to the sky.

Wood and straw were the materials chosen for the monument to refugees erected by the workshop led by Cornelis Nuijten and Hilde Vanwildemeersch, with Els van den Veyver and the Syrian refugee Jameel Hadidi. Starting from an idea proposed by Hadidi himself, a tireless group of students with different faiths and origins created a monument inside a church to commemorate the destroyed Monastery of Mar Musa – a place of encounter and meditation open to all religions. In the installation, a narrow passage in an increasingly impervious three-dimensional straw maze led through the dark to a seat beneath a window, which allowed air, light and sound to filter in from outside. This touching work symbolised refugees’ journey through the darkness and unknown.

Entirely built with the traditional technique of wooden groove and pin joints, this knockdown, recyclable installation offered students the opportunity to test the technique of house-building with straw bales. The bales were stacked on the load-bearing structure, compressed with straps and fixed with wooden battens and hammers. Above all, this installation was a chance to engage in some extraordinary teamwork and group development, while dialoguing with those who risked their lives to cross perilous seas, and were lucky enough to reach the opposite shore with their family.