After a first year of research on the urban condition focused on Roma and its latest expansion (romalab/esplorazioni dell’ultima città), the romalab or REAL Relational Architectural Laboratory has chosen to focus its second year of research on a wider analysis of the latest urban growth in Europe, beginning with three main study cases: Barcelona, Berlin and Rotterdam.

As in the previous working phase, the main attitude of the lab is to look at the same time for the actual traces of the undergone changes but also to look for new practices in urban change design, to build on the same time a knowledge of the actual urban situation and a dialogue between different research practices similarly oriented toward the issue of public space.

To achieve this aim the lab decided to move forward organizing a series of public seminars about the latest growth of Barcelona, Berlin and Rotterdam, inviting the most interesting subjects involved in new research practices (and collective discussions) born in the latest years in each context. The seminars, as well as the following convivial meetings, and the later elaboration of the seminar materials to be published in the real website, are thought as ‘relational tools’ to build a shared knowledge and an international research network on the urban issue.

Even the choice of the three cities has been made not only to look at three main areas of changes but also to look at the main european contexts where new, often collective approaches to the urban issue have born. At the same time, the three cities represent very different situations and approaches to urban change. Barcelona has been characterized by extension but also re-signification of the existing urban texture (the coast line and the Diagonal). In Berlin, the latest city has been inserted into the historic city, through the transformation of central areas as well as of the east part. Rotterdam, and more generally the Netherlands, with its huge resources employed in the more recent urban expansions and renewals, are an exemplar case of entirely designed urban landscapes.

For the Barcelona seminar have been invited Manuel Gausa on one side, as promoter through Metapolis and HyperCatalunia of a wide reflection on the city and its territory through the projective tools of architectural visions and designs, and groups like Site Size and Area Ciega on the other side, as witnesses of a more critical and political active approach, concerned with the more sociological aspect and costs of the urban dynamics, together with an architect/sociologist like Franco La Cecla that could act as an observer of both the spanish and italian situations.

In the Berlin seminar Francesca Ferguson, curator and founder of Urban Drift, and Klaus Overmeyer, founder of Urban Catalyst and Shrinking Cities, have been the key speakers to tell about the latest transformations in the city, and about the spontaneous strategies to activate creative resources in the urban realm, together with Paola Cannavò, founder of studio.eu, and italian berlin-based emerging all-female group of architects. With a paradoxical feedback that connects the Berlin history to the Israeli and Palestina actual situation, Alessandro Petti, an italian architect now based in Bethlem, author of a book on the contemporary strategies of spatial control and segregations “Arcipelaghi e enclave”, has focused on the contradictions between opposite strategies – the creative re appropriation of temporary autonomous zones and the fragmentation of the contemporary city in segregated clusters – as parts of the same logic of control over the territory. 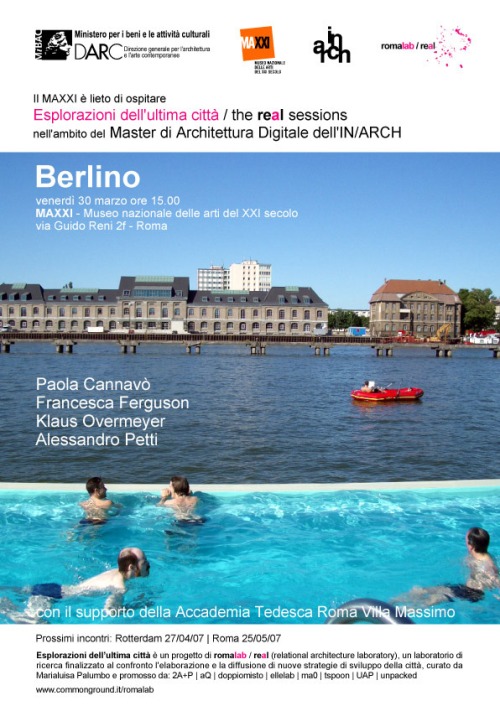 For the Rotterdam seminar, Hans Ibelings has been invited to give an overall view on the recent transformations of the Dutch cities, compared to what’s happening in the other european countries, from his point of view as director of the first european architectural magazine, A10.  Dennis Kaspori of the Maze Corporation gave a view on the recent development of Rotterdam, seen through his active practice in architectural and artistic projects, where a deep immersion in the real social context generates strategies and visions for the future development, together with Stealth [u]ltd that could give on the other hand – as they write – “a view on the city driven by dynamics of spatial and programmatic evolution”. The key element to create a connection with the italian reality was Gianpiero Sanguigni. 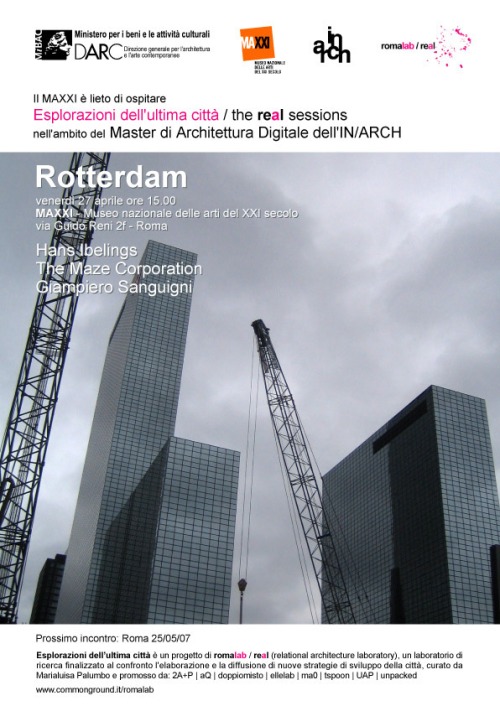 The last seminar focused again on Rome, presenting the researches/visions of the romalab collective…