Looking at the first neuromorphic space. Conversation with Paul Verschure.

“Ada – the intelligent space” was an interactive pavilion at the Swiss National Exhibition Expo.02 designed by the Institute of Neuroinformatics, a research institute at the University and ETH Zurich.

“Ada is a novel artificial organism, a creature in the shape of a space that can perceive and react to its surroundings. At the same time, her form facilitates a novel interaction between humans and machine that goes beyond the possibilities offered by a conventional computer, such as keyboard, mouse or joystick. Ada has sensory organs. She can see, hear and sense touch and contact. While Ada cannot communicate with words, she expresses herself through sounds, light and projections. Ada likewise learns how to synchronise her various components, such as the floor plates, the movable eyes and the light fingers. Ada is able to remember the visitors with whom she has played and whose gestures, movements and sounds she has observed. Like humans, Ada learns from experience: she can store an incident and later build upon it. Ada can furthermore link various pieces of information and draw conclusions from this. Upon observing two individuals standing close together for a long period of time, she concludes that they are a pair.” 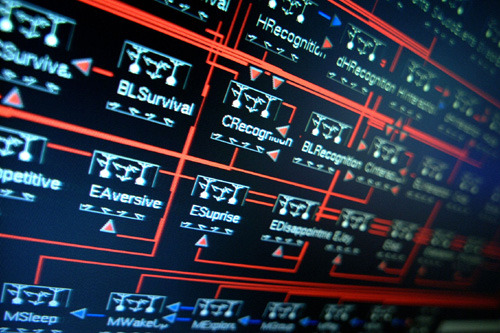 MLP – The first question I’d like to ask you is about your research path. Psychologist, you are now working in an institute of neuroinformatics, where you direct, among other things, the project of an intelligent space. What do you think about the convergence, emerging from this path, between the psychological and the neural, the organic and the informatics and also the sentient and the built space?

PV – Ada has allowed us to push our research program to a new level of complexity. As a psychologist I have turned to constructing artificial behaving systems, such as robots, in an attempt to develop theories that can help us to understand how the physical and the psychological realms are linked. Ada as such is a direct expression of this philosophy that ultimately goes back to the Neapolitan philosopher Giambatista Vico who proposed that to construct means to understand or the fact and the truth are reversible (factum et verum convertitur). Special about Ada is that it allowed us to construct an organism at an unparalleled level of sensory-motor complexity and that since we had transformed the space itself into a robot we could directly assess how the visitors reacted to it by virtue of the presence of a large amount of sensor systems. Ada does not look like any organism anyone has ever encountered and that it aims at establishing a continuous dialog with the visitors. Ada has allowed us to systematically investigate the properties of these interactions. For instance, about half of the visitors we have asked to fill out a questionnaire after leaving Ada believed that they had visited an entity. 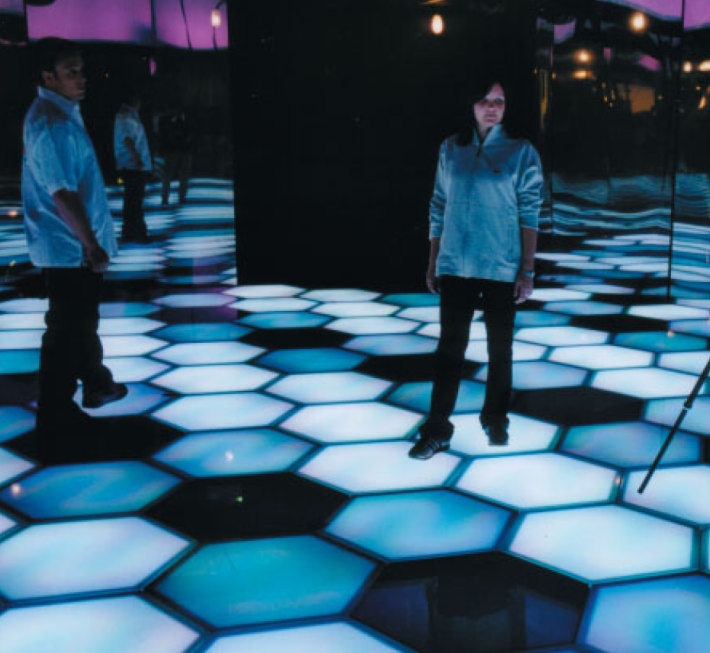 MLP – Neural networks, on which Ada’s intelligence is based, represent an alternative to the classic artificial intelligence computational paradigm towards an hybrid system, a system that, even if it is made up of silicon and circuits, attempts to simulate the basic principle of the brain, the neural connections. From this point of view Ada’s floor is an extremely interesting element. The hexagonal floor plates, equipped with weight sensors, function like a neural network: when a floor plate lights up, it then communicates this to the adjacent floor plates, so that every floor plate knows the state of the overall system as well as that of its neighbour and Ada is able not only to determine where visitors are located within the space but also in which direction they are moving. So what happens as a whole when something or somebody comes in Ada’s range of perception?

PV – Ada’s behavior is organized in different modes that can range from sleep to playing games. The response of Ada to a visitor or group of visitors will depend on the mode it is in. For instance, when Ada is exploring its environment visitors will be traced by a unique color on the floor and their sonic behavior is rewarded by sonic and visual “answers” from Ada. In addition Ada deploys probes, i.e. flashing tiles in the proximity of the visitor, to assess whether this particular visitor is responsive to Ada or not, or whether Ada should become interested in this visitor and allocate resources to him or her. These “local” interactions again affect Ada’s overall well being. Ada’s level of overall happiness is in turn translated into the soundscape and the visual environment in which the visitor is immersed, establishing a closed loop between environment and visitor or man and machine.

MLP – In what sense does Ada learn from experience? What actually is an experience to Ada? And what about an interesting experience?

PV – Ada can learn to deal with some of the unpredictable aspects of her environment. One of these is the effects of different cues on visitors. A priori it was not know to what kind of effects on the floor visitors would adapt their behavior, i.e. follow to reach a certain location. We used our neuronal models of learning that capture aspects of Pavlov’s classical conditioning to allow Ada to learn what kind of cue would be effective given a certain crowdedness of the space. This allowed Ada to bring visitors to regions in the space that would usually be avoided. For Ada any visitor constitutes a unique experience, although I would not claim that Ada is conscious of this. I do believe that Ada is a step towards the construction of conscious machines by virtue of its tight coupling to the world in which we, humans, behave. An interesting experience for Ada is a visitor who wants to play along, who is reactive, inquisitive and interactive. 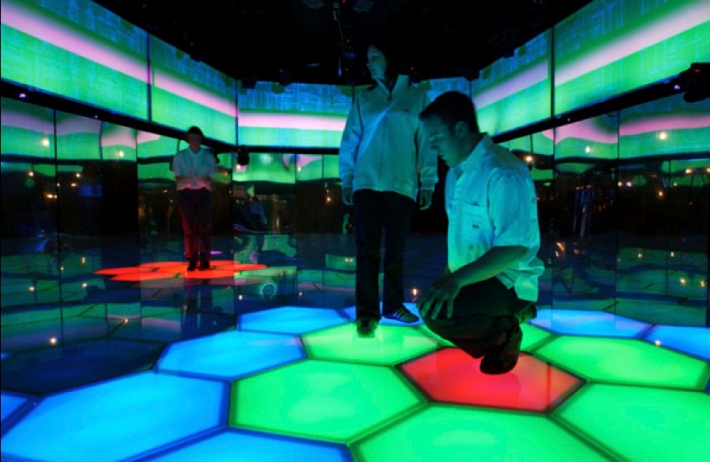 MLP – Regarding auto-organization and emerging process, what margin of evolution is implicit in the system? Could Ada surprise you by elaborating a new behaviour, maybe learning a new game?

PV – I wish! The surprises are on the one hand in the practicalities of functioning technology, Ada and its artificial brain worked reliably even though it is at a level of complexity that not a single human knows what is going on. Further surprises were in the emergent patterns of interaction between Ada and the visitors and the emergent aesthetics of musical and visual composition that resulted from it. To learn completely new behaviors is part of our project to construct a next generation of Ada systems. Another surprise that must be mentioned is the amazing patience and creativity of the many visitors that Ada has encountered. Ada did bring out the best in many of them. I think that this does illustrate an important future contribution of this kind of technology in enriching our lives.

MLP – One of the main features of architecture is its way of being a boundary system, a margin, more or less porous, between an inside and an outside. From this point of view I’ve always being fascinated from its parallel to the body: on one side there’s the world, on the other side there’s my inner space. Perception, learning and thinking, everything is played on this border and on the tension between the two spaces. To give the built space a nervous system means, in a way to move the ‘inside’, the inner space of architecture, to a new layer…

PV – This is a very good way of putting it. One element of Ada is that the ‘inner world’ is made transparent to outside observers, something humans are not able to do in a similar way. Ada’s level of goal achievement, sensor data and emotions are directly translated into an ongoing sonic and visual composition that defines the exterior of Ada. As a result Ada directly communicates its internal environment to its external world. This effect is not necessarily due to our wish to construct a brain for Ada, but stems from our wish to construct coherent behaving and communicating systems. It is true that so far the only systems that we know that can achieve this have brains.

MLP – If Ada memorizes and in some way processes faces, gestures, voices and behaviors, is it possible to think that in this process something similar to a mental space emerge in her circuits organization, a space maybe possible to visualize and to ‘virtually’ walk through?

PV – Yes, definitely. Ada constructs a rather complicated and intriguing internal model of the world, i.e. the visitors. This world could be further expressed in its language of sound, graphics and light. In a sense it already happens, albeit in a very abstract way. 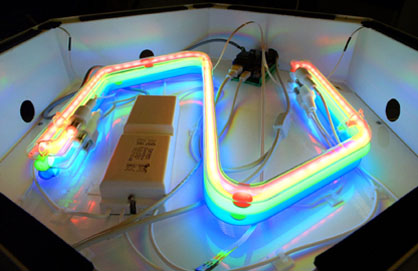 MLP – Is there any other research project of ‘neuromorphic spaces,’ or more in general, of sensitive and interactive spaces that you would recommend looking at?

PV – There are a number of projects that deal with interactive spaces and/or intelligent rooms such as MIT’s intelligent room project or the intelligent space project pursued at the University of Tokyo that would be worth looking at. However, both these projects are rather utilitarian in the interactive technology they apply. As an affective-cognitive space Ada is rather unique.

MLP – One of the usual critics against this kind of project is that it of being an always more and more perfect and intrusive control system. What do you think about this?

PV – This is a relevant criticism of technology in general. However, Ada did not scare its visitors. We know this because we asked them. Most of them felt comfortable and happy in this space. An important contributing factor to this is that Ada was transparent; it did not only collect data and process it to decide on actions. The goals of the system were transparently communicated in Ada’s language. As with a human observer, one that responds to us we can understand and accept, one that just observes without any form of feedback is threatening. Technology has so far been of the latter kind while with Ada we show that technology can and should be as our partner to help us shape and interact with a complex world.